The Lodge at RTPI

The Lodge at RTPI is home to the Roger Tory Peterson Institute. Designed by Robert A.M. Stern, the building reflects several influences, including national park lodges, Greek temples, and the Arts & Crafts movement. Completed in in 1994, it was constructed by GL Olson, a local firm that carries on the craftmanship traditions of Jamestown’s early Swedish furniture making industries. The beauty and sanctuary feel of the building, combined with the intimate gallery spaces, provide a unique museum experience.

Construction funds were provided largely by the State of New York and the Gebbie Foundation. The building is currently owned by Jamestown Community College and operated by RTPI under a long-term lease. 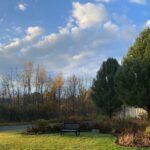 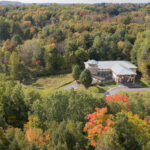 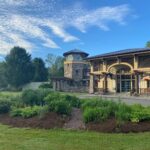 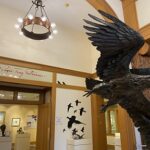 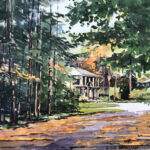 “Robert A.M. Stern, for whom the world’s architectural past is a great, rich, cornucopia of ideas, often works within the Classical tradition. Stern’s Classicism, however, is not exactly pure, because he frequently mingles it with other styles.

“Stern chose to design a building [for RTPI] that would celebrate nature, drawing on 19th- and early 20th-century Rustic national park lodges and Adirondack camps as models. He subordinated these Romantic references, however, to humanity’s first buildings to elegantly inhabit nature–Classical Greek temples. The elements of the Peterson Institute that visitors first encounter are the most straightforwardly Classical, beginning  with the hipped roof reading as a pediment above a Beaux-Arts stone and timber porch leading to a great hall with a log peristyle. Within, the principal spaces are centered and axial.

“The octagonal tower, the loggia, and the brackets supporting the extensive projecting roofs are by contrast dramatically Romantic and are derived from the Picturesque houses of John Nash in the early 19th-century England, a style represented in America by the work of Andrew Jackson Downing. These details also reveal the influences of the Ahwahnee Hotel in Yosemite, a majestic, superbly crafted stone and timber lodge designed and build in the 1920s by Gilbert Stanley Underwood.

“Stern has also drawn upon the fine craftmanship traditions of local upstate New York culture. The Jamestown region was settled by Swedes who set up furniture factories that became a core industry. Swedish architectural influence is acknowledged by the building’s vertical board and batten siding, its cream colors, and complex wood joinery. Other regional references include the wooden Victorian houses at nearby Chautauqua.

“Stern also considered the architecture and furniture design of the Arts and Crafts movement founded in the latter half of the 19th century in England by William Morris and John Ruskin. His interest, however, was its American expression in the work of Gustav Stickly, the leading American furniture maker of the movement, who had his factory in Syracuse, New York, and the similar furniture produced at Elbert Hubbard’s Roycroft Community workshops in East Aurora, New York. The Arts and Crafts movement, in all its manifestations–architecture, furniture, an the decorative arts–displayed a deep feeling for nature, as did the Adirondack camps and the best of the national park lodges. Stern’s search for an image that would best serve and express the mission of the institute is evident in his selective appropriation of these sources.

“Despite the stylistic virtuosity his work denotes, Stern believes that no building, including the institute, should be discussed exclusively in terms of style. “The design is not a flag waver for any particular style; it is a flag waver for the Roger Peterson Institute and its goal,” Stern admonishes. “My idea was to make a wooden building at a public scale–that was a challenge.” He tried to create a kind of rust Classicism, not for the same of some Classical polemic, but to relate the building to the intended culture of many generations of local people, and to impart a very clear and simple expression.

“Only a third of the building as designed has yet been built; the rest, it is hoped, will be constructed as funds are raised. the composition of the whole is made up of several small, independent volumes. These elements are arranged to define outdoor public squares and gardens. A genuine wooden building would have been impractical, in part because of the cost of meeting various safety codes. The structural frame is steel, and the walls are concrete block surfaced in board and batten or 8-inch-thick rough granite imported from Pennsylvania. The stone has been so carefully selected, shaped, and laid in place that it does not read as veneer.

“Only the steel windows give the building a contemporary edge, but these have been carefully scaled to be consistent with the historicist architecture. The windows read as openings in the mass of wall rather than as insertions of curtain wall. For design partner Roger Seifter, the building is a “dialogue between the structure and materials of 100 years ago and the best of what is available today. we worked the details over and over. It is exceedingly well built.”

“The high level of craftmanship is particularly evident in the institute’s great hall and the libraries. The Engelmann spruce columns in the all, like those that frame the entrance to the Classical porch, come from Boise, Idaho. The trim throughout the interiors is white quarter-sawn oak with a smooth finish in effective contrast to the rough surfaces of the log columns. The plasterboard used throughout is painted to simulate natural plaster. All the lighting fixtures, including the hammered-copper chandeliers in the library, were designed by Stern based upon Arts and Crafts models.”